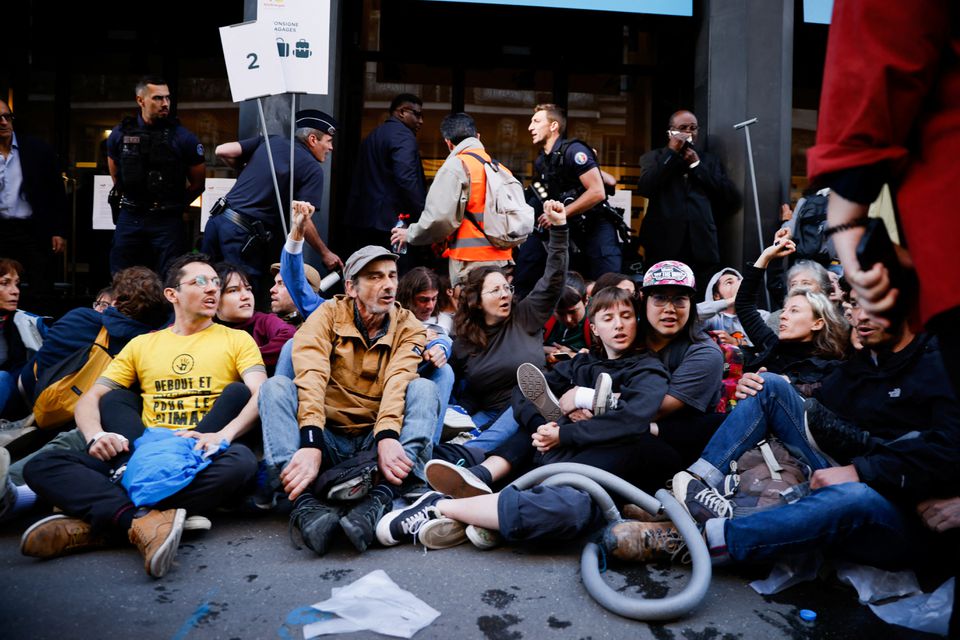 EXPLORATION AND DEVELOPMENT OF FOSSIL FUELS

Exploration and development of fossil fuels has brought about a number of issues. On 25th May 2022, TotalEnergies SE was scheduled to hold its Annual General Meeting in Paris. However, a group of climate activists staged a protest, demanding that Mr Patrick Pouyanné, the CEO commits, among other issues, to put an end to all new fossil fuel projects including the East African Crude Oil Pipeline (EACOP) in Uganda and the Liquified Natural Gas project in Mozambique. The protest was disruptive enough to cause the postponement of the meeting. A similar protest was caught in a viral video in which a climate activist confronted the newly re-elected French President Mr Emmanuel Macron demanding that he stops the EACOP Project.

Earlier on 23rd March 2022, a group of climate activists met Pope Francis in the Vatican to seek his backing in their crusade to halt the construction of EACOP. It is important to underscore that EACOP is one of the avenues by which Uganda plans to commercialize its oil and gas resources.

What these events signify is the extent to which activists are willing to go to stop Uganda’s oil and gas projects.

The global quest to deal with climate change should first deal with the all-important question:

Is the world ready for a full-stop to the exploration and development of fossil fuels?

To put this into perspective, the share of fossil fuel (oil, gas, and coal) in the global energy mix in 2019 was about 80%. According to the International Energy Agency (IEA), this percentage will steadily decline to just above 20% in 2050 on the assumption of an accelerated phase-out of coal and electrification of transport. However, most significant to the above question is the aspect of demand, as energy remains a primary need for every economy in the world.

According to the BP Energy Outlook for 2022, the post-COVID-19 period is seeing a rise in oil demand back to around 100 million barrels per day (Mb/d) and is projected to keep at that level until the mid-2030s before declining gradually to around 80 Mb/d by 2050. An analysis was made for accelerated, and net-zero carbon scenarios where the average annual investment in renewables, particularly solar and wind energy, was set at more than US$500 – US$800 Billion while reducing investments in fossil fuel projects. This projected a significant decline in oil demand to around 45 Mb/d and 25 Mb/d by 2050 respectively. With the historical average annual investment in solar and wind energy in the pre-COVID period ranging between US$250 – US$300 Billion only, it shows that the world is still a long way from closing that gap by 2050.

Gas demand on the other hand is projected to continue growing from about 3,900 billion cubic meters (bcm) in 2020 to more than 5,700 bcm in 2050; largely driven by strong demand from Asia led by China and India. Cutting down this demand will involve significant policy changes from the developed world including the United States and the European Union whose combined gas demand stands at about 36% of global supply. These projections show that whereas there is consensus on the need to cut down carbon emissions from fossil fuels, the reality is that like in all businesses the principle of demand and supply will continue to drive the decision whether to invest or not until an alternative product is readily available.

According to International Energy Forum (IEF) and IHS Markit, the next two years are critical for oil and gas investments to restore market balance and meet future energy demand post-COVID-19. Particularly, underinvestment in oil and gas development projects would lead to higher prices and volatility in the years ahead to the detriment of other sectors, and to prevent this, investments need to return to pre-pandemic levels of over US$500 billion a year.

The response from the industry in regards to fossil fuels

The international oil and gas industry has responded. For instance, Abu Dhabi’s National Oil Company announced in May 2022 that three new oil discoveries estimated at over 650 million barrels were made in onshore blocks, in addition to an earlier natural gas discovery in an offshore block estimated at 2 Trillion Cubic Feet of gas. Similarly, both Shell and TotalEnergies made significant discoveries of oil and associated gas offshore Namibia earlier in the year. An article published in the Journal of Petroleum Technology on 25th May 2022 indicates that Equinor announced a new Barents Sea oil discovery and “reached a Final Investment Decision on a group of gas and condensate wells”.

These discoveries and the attendant investments signify a growing need to meet the energy demand using oil and gas, even as the development of renewable energies continues, particularly underscored by the need to ensure energy security by both developed and developing countries.

Important to note is that while activists both in-country and overseas step up the efforts to stop the development of Uganda’s oil and gas projects, other countries in the world are stepping up the exploration and production of oil and gas. The UK’s North Sea Transition Authority has reported identification of 33 new oil and gas projects targeting production of 1.3 billion barrels of oil and gas. In the United States, Bloomberg reports that Exxon Mobil and Shell, some of the biggest oil companies in the world, have appealed to congress to issue more drilling permits to address the challenge of energy security. Other global oil and gas publications like Upstream and World Oil have reported ongoing licensing rounds in Angola, Mozambique, and Brazil among others; while Algeria, Norway, Saudi Arabia, Iran, and the USA have increased the production of oil and gas resources.

It is unfair for the activists both in-country and overseas to make significant investments in stopping the development of Uganda’s oil and gas projects, yet the world is currently in an energy crisis, a situation other countries have recognized and are progressing with petroleum exploration and development.

What is the need?

According to Business Times Uganda, the need to reduce the global carbon footprint is one that all countries agree on, and that is why investment in carbon capture and utilisation projects is expected to quadruple between 2022 to 2025 with an estimated cumulative global expenditure of over $50 billion. However, equally important is the need to meet the energy demand that is required to drive economic growth and achieve sustainable development goals. Until renewables become more efficient, reliable, and affordable to provide the needed energy security, the world is not yet ready to stop the exploration and development of fossil fuels.