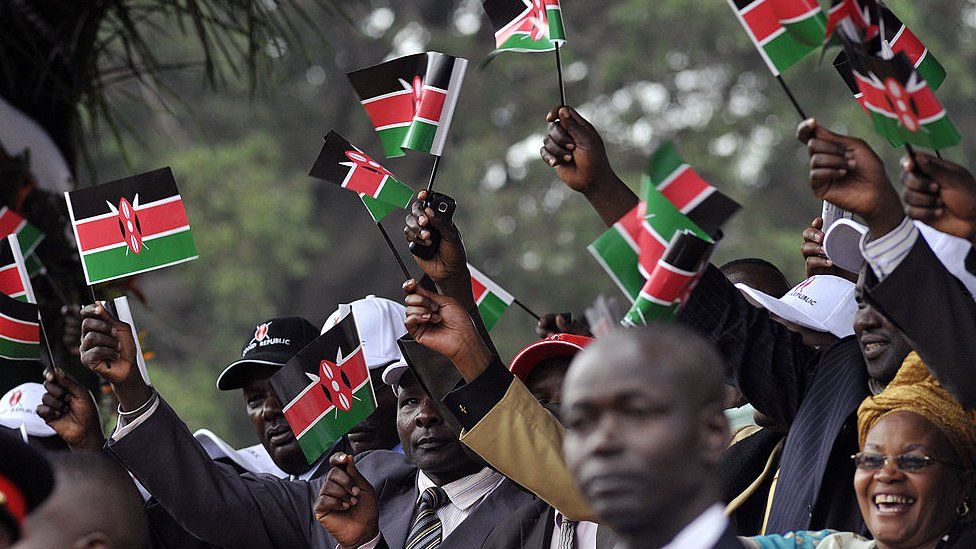 Kenyan voters will on Tuesday next week elect their new President, as well as cast votes for members of the National Assembly and Senate, county governors and members of the 47 county assemblies.

Next week’s elections will be the third general election after the promulgation of the 2010 Constitution of Kenya.

Incumbent president Uhuru Kenyatta is not eligible for a third term; the same fate applies to Kenya’s county governors, who have already served two terms.

This year’s general elections in Kenya have registered the lowest number, four, of presidential candidates to be cleared since multipartysm was implemented in 1992.

The Constitution of Kenya requires that a general election of members of parliament should be held on the second Tuesday of August in every fifth year, which means that the next general election is scheduled for August 9, 2022.

If Kenya is at war, according to the constitution, the election can be delayed, if a resolution is passed in each House of Parliament by at least two-thirds of all the members of the House. Such a resolution can delay the election by up to six months and may be passed multiple times provided that the delays do not cumulatively exceed 12 months.

The Kenyan constitution requires that a presidential election should take place during the same time as the general election.

According to the Constitution in such circumstances, an election needs to be held within 60 days after the vacancy arises in the office of the President.

As of June 6, 2022, only four presidential aspirants and their running mates had been cleared. Walter Mong’are’s nomination to run for presidency was revoked, after it emerged his degree was not from a recognised university as required by law. The final list of presidential candidates are;

The following politicians below declined to run as presidential candidates and endorsed Raila Odinga:

Kalonzo Musyoka, former Vice-President of Kenya (2008–2013) and leader of Wiper;

The following individuals who are prominent Kenyan politicians also declined to run as presidential candidates and endorsed William Ruto:

Uganda neighbours Kenya. International travellers going from Uganda to Kenya or vice versa can either make the journey by air or by land, crossing the border at a designated checkpoint.

From Ugandan citizens taking a trip to the other side of the frontier to backpackers touring around Africa, many people cross the Kenya-Uganda border each day.

There are a number of Kenya-Uganda border crossing points that land-based travellers may use to pass between the two East African states. This makes Uganda vulnerable to any violent outcomes from the forthcoming election which is just days away on August 9, 2022.

As is the norm in African politics, and Kenya in particular, in the build up to election season and thereafter, ethnic violence tends to take centre stage.

As Uganda’s immediate neighbouring state of Kenya prepares for general elections this month, Business Times Uganda zooms in on the potential causes of conflict as well as trends in Kenya’s political climate that affect political dynamics within Kenya.

Even at the start of 2022, the race to be the country’s next Presidential elections was already heating up.

“The months leading up to, and after, elections have been the most violent periods in Kenya’s post-independence history, with thousands killed and hundreds of thousands displaced in election cycles since 2007,” says SaferWorld, a global organization aimed at preventing violent conflict and building safer lives.

The advent of multi-party democracy in Kenya in 1992 led to the ethnicisation of politics, with parties coalescing around tribal power-brokers and an ever-changing political landscape as inter-ethnic alliances were formed and fell apart. This continues to characterise Kenya’s electoral landscape today.

SaferWorld also reveals that in the absence of parties based on a consistent political ideology, the instrumentalisation of tribal identities and manipulation of ethnic grievances remain the primary basis of political mobilisation, with the threat of violence – and often its use – hanging over every election cycle.

Uganda being a land-locked country without direct access to the ocean his geographical limitation makes it highly dependent on Kenya as a transit route for much of Uganda’s trade.

The two East African nations share five border points. There are five Kenya-Uganda border points where travellers may cross from one country into the other. These include: Busia, Lokitanyala, Lwakhakha, Malaba, Suam.

The main checkpoints are the Busia and Malaba border crossings. They both lie on main roads between Uganda and Kenya and there is also a train crossing at Malaba, operated by Rift Valley Railways.

In terms of area size, the Kenya-Uganda border stretches for 772 km, with five crossing points. Of these, three are in small towns that provide access mainly for locals crossing the border for work or to see family.

With less than 10 days left to the election day, in the run up to Kenya’s 2022 general elections, there are some signs that the ethnicised political discourse and its underlying drivers are slowly changing.

“As is the trend in so many countries around the world, this has been driven in part by the experience of COVID-19 and the restrictions on people’s lives that have come with the pandemic, which have exacerbated and highlighted inequalities among Kenya’s citizens,” notes SaferWorld in a recent report.

Whether this ushers in a new and less violent form of politics remains to be seen.

According to political analysts, it may be that the new political dynamics in Kenya will prove just as divisive and destructive as the election cycles that came before this one.

“Indeed, there are growing fears that, unless the current political discourse is toned down and the nature of electoral processes re-imagined, Kenya will once again descend into violence in the run-up to this year’s elections,” notes a report by SaferWorld.

The Kenya-Uganda border town of Malaba is the second-busiest border crossing between the two countries. North of Busia and east of Tororo, Uganda, it is the most convenient checkpoint for those traveling from Uganda to Eldoret in Kenya.

The Uganda-Kenyan border’s width is extensive, with around 1 km between the Kenyan and Ugandan border posts. Travellers crossing can cover this distance on foot or by boda-boda (bicycle taxi).

The main port in Tanzania’s capital Dar-es-Salaam is seen in this aerial view taken on December 4, 2009. REUTERS/Katrina Manson

With Kenya’s Tuesday, August 9, national election date drawing even closer by the day, unease and tension are growing in Uganda’s business community over any possible chaotic outcomes that could spill over and disrupt the flow of goods at the Mombasa port.

This port, which is heavily relied upon by many Ugandan traders handles more than 85% of the country’s imports and exports.

Ugandan traders seemingly shaken by the political tension in Kenya recently told The Africa Report in July that they will resort to the Dar- es- Salaam port, located in the more peaceful neighbouring nation of Tanzania, which the Tanzanian government has been pushing as a viable and cheaper alternative.

What has caused even more tension and unpredictability is the fact that outgoing President Uhuru Kenyatta is set to complete his term in office and hand over to a new president.

The presidential election as part of Kenya’s general elections this time round pits veteran opposition leader Raila Odinga who has Kenyatta’s backing – against William Ruto, the deputy president.

It must be noted that in Kenya’s recent political history, elections have culminated in violence and been contested in courts of law.