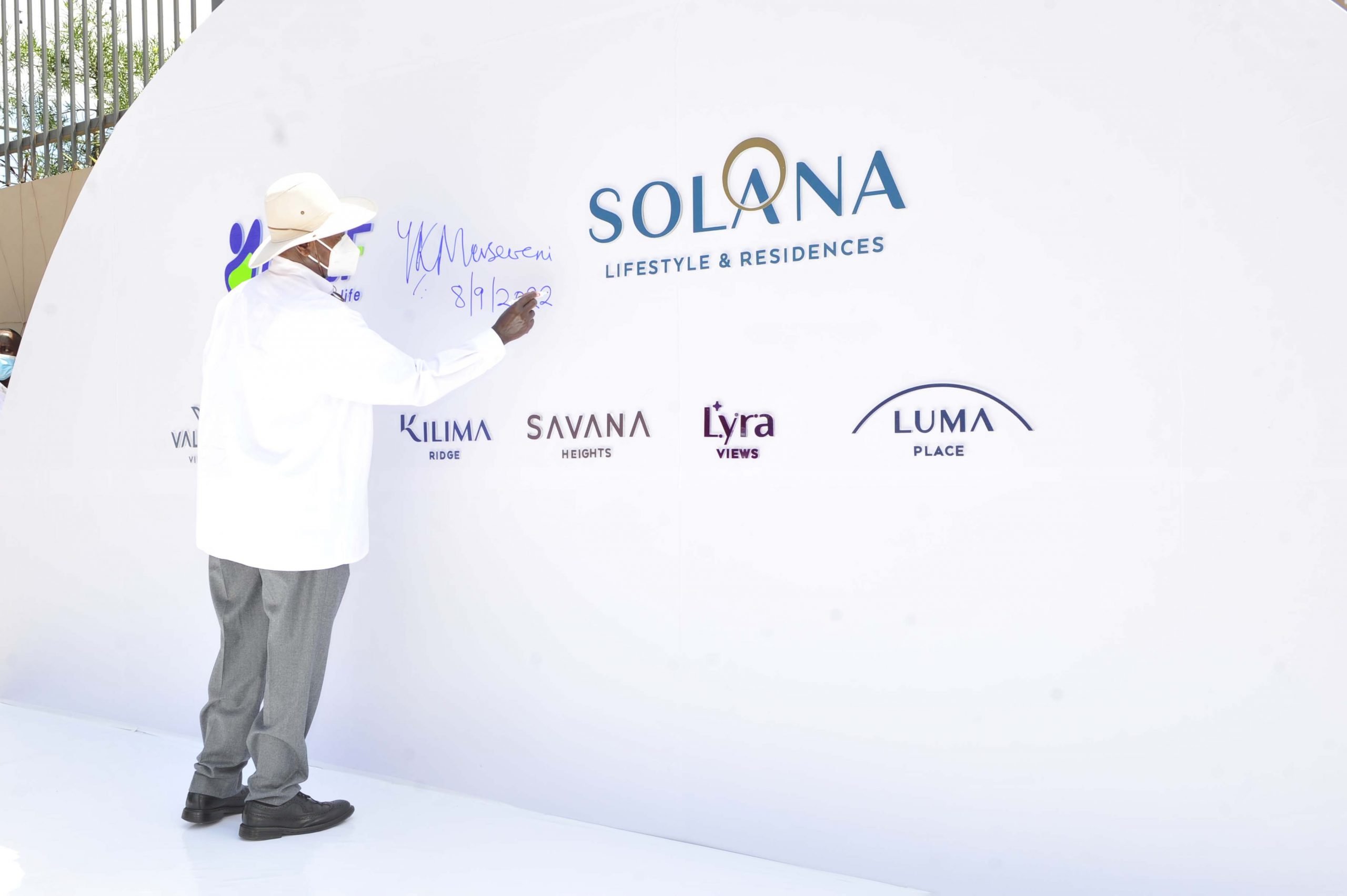 The state of housing in Uganda

The United Nations designated the first Monday of October of each year as World Habitat Day to reflect on the state of towns and cities, and the basic right of all to adequate shelter.

According to Habitat for Humanity, the housing deficit in Uganda stands at 2.4 million housing units, out of which 210,000 units are in urban areas and 1.395 million units in rural areas.

An estimated 900,000 units are substandard and in need of replacement or upgrading. By 2022, Uganda’s population was projected to be about 48 million people.

Uganda’s housing situation is characterized by inadequate homes in terms of quality and quantity in both rural and urban areas.

Seated on 60 hectares, the project consisting of 306 houses is just 10% of the total land (600 hectares) that the Fund intends to develop at a cost of about half a billion dollars.

Richard Byarugaba, the chief executive officer of the Fund told the guests that launched units, ready for sale at a cost ranging from 150,000-800,000 dollars, cost the Fund 73.3 million dollars.

Uganda’s population was projected to be about 48 million by the end of 2022. This rising population growth in Uganda is expected to require over three million more housing units.

According to the Centre for Affordable Housing Finance in Africa, Uganda’s population growth rate is 3.5%.

At 5.99%, Uganda’s urbanization rate is high and this is complemented by high population growth. This has resulted in 48.3% of the country’s urban population living in the ever-growing informal settlements.

Approximately 94.5% of the population live in informal settlements and do not have access to basic sanitation services. Over the last financial year ending June 2021, Uganda’s economy has grown by 0.3% to 3.3% from 3.0% recorded in the 2019/2020 financial year. This growth pattern is owing to expansions in household sector demand, supported by a strategy of monetary easing pursued by the monetary authorities after the earlier slump in growth attributed to COVID-19 and lockdown measures on the economy. However, notably, the housing sector continues to operate, unabated by the lockdown.

Other sectors of the economy did not do well as restrictions in the business environment translated into a reduction of growth in private sector credit to 6.8% for 2020/2021.

This is a significant reduction from a year-on-year average growth of 12% for the previous three years to June 2020. The slow growth in borrowing or lending was expected to continue over the next financial year to June 2022 on account of the low levels of economic activity after a second lockdown of the economy over the period June 18 to July 29, 2021.

On the market side, Uganda’s general price levels have remained relatively low and stable with headline and core inflation rates subdued at an average of 2.4%and 3.4% respectively over the one year to July 2021.

This is well-aligned with the 5% inflation rate target pursued by the monetary authorities in the East African regional economies. The low inflation rate has mainly been due to lower food and utility prices coupled with low household demand for the bulk of goods and services.

NSSF’s Richard Byarugaba notes that the population of Uganda since 1986 that has migrated from rural to urban areas has been more than 10 times which calls for proper housing.

He says that according to statistics, over 50% of Ugandans, in 2050 will be living in cities.

Upon completion, the Solana Lifestyle and Residences will be the largest project in East Africa, comprising 2,750 residences, apartments, townhouses, bungalows, and villas.

Bank of Uganda’s projections indicate that this trend will change, with inflation forecasts pointing to a gradual rise throughout the year on account of the pandemic containment measures, but remaining within the 5%target range in the medium term.

On the property market side, the marginal increment in general prices translated into a relatively higher rise in property prices, with implications for housing affordability.

The Residential Property Price Index (RPPI) for the Greater Kampala Metropolitan Area rose by 5.6% in the the2020/21 financial year compared to the previous financial year.

The increase is largely attributed to increments in property prices across Uganda’s central region, mainly because of a high urbanization rate of 5.2 %.

The rise in the RPPI negatively affects housing affordability even in the restricted economic environment. This is because housing became a crucial need for the urban working population when the general population was confined in their homes during the COVID-19 lockdown periods.

Homeownership has worked positively in boosting resilience to the effects of the pandemic as homeowners are spared the rent burden even through periods of restricted economic activity and low income. The property also works as collateral for the owner to access credit.

The strain in the economic and business environment over the years 2020 and 2021 has hurt housing affordability for the majority of households in the country, with 48.3% of Uganda’s urban population living in slums and informal settlements, affordability for decent housing continues to hamper development in the sector.

Even with the entrance of a 26th financial institution in Uganda’s banking space, interest rates have remained high, averaging 19.2%.

On the microfinance side, incremental housing loans are available at interest rates varying from 22% to 26% over four years of monthly repayments.

Although the Uganda Bureau of Statistics puts 2020 the deficit at 2.1 million, experts estimate the number could be about 2.4 million.

In a recent interview with Daily Monitor in October 2020, Mr Robert Otim, the National Director of Habitat for Humanity Uganda, said about 60 per cent of the population does not have adequate housing.
“About 12 million people have no place to call home while 24 million are living in substandard homes,” Mr Otim said.

He also added that the housing deficit continues to double every year.

“Through cheap mortgages, the government should be able to provide cheap and affordable houses,” he said.

Habitat for Humanity Uganda is a Christian Housing ministry which builds houses for people in need.

The housing project is in line with SDG II (Sustainable Development Goal II), which recognizes the need to make cities and human settlements inclusive, safe, resilient and sustainable.

“By 2030, ensure access for all to adequate safe and affordable housing, basic services and upgrade of slums. Integrated housing frameworks support economic, social and environmental policy planning and infrastructure linkages across the urban-rural ecosystem and building increased resiliency,” the SDG states.

Ms Brendah Luyiga, the Resource Mobilization and Communications Specialist at Habitat for Humanity Uganda, 2020 said that each unit costs UGX 20 million to UGX 25 million depending on the location.

Each of these units has two bedrooms, one sitting room, a store, a 3,000-litre water tank for rain harvesting and a latrine with a nearby bathroom, all permanent structures.

All the units have easy access and rails for persons living with disabilities because all the beneficiaries are either parents or guardians of disabled children.

Ms Luyiga says: “To date, houses built in Fort Portal are 16. Of these, 10 are complete and occupied and six are still under construction.”

She added that Habitat for Humanity Uganda has built more than 40,000 houses in 20 districts, including Kumi, Mayuge and Kiryadongo.

“Marking in commemoration of this year’s World Habitat Day under the theme: Housing for all: A better Urban future, we are promoting a decent living campaign, an initiative aimed at improving the lives of vulnerable communities in Uganda by seeking the support of corporate partnerships and the goodwill of well-wishers,” Ms Luyiga added.

Habitat for Humanity Uganda is a Christian Housing ministry which builds houses for people in need.

Mr David Rwamwaro, the chairperson of Mugusu Town Council, said: “This project has not only helped in social development like solving the housing problem of the vulnerable children but also created employment opportunities in our town council through construction works and supplies of materials.”

The United Nations designated the first Monday of October of each year as World Habitat Day to reflect on the state of towns and cities, and the basic right of all to adequate shelter.

The day is also intended to remind the world that we all have the power and responsibility to shape the future of our cities and towns.

Peter Kimbowa the Board Chairman at NSSF says that since 2015, the Fund’s Real Estate strategy is to restart and implement to conclusion all real estate projects that had stalled and establish a national footprint with a project in every region in Uganda.

In a bid to achieve the strategy, Kimbowa notes that NSSF embarked on a deliberate plan to ensure that all their housing and commercial projects are implemented by 2025.

Upon completion, the Solana Lifestyle and Residences will be the largest project in East Africa, comprising 2,750 residences, apartments, townhouses, bungalows, and villas.