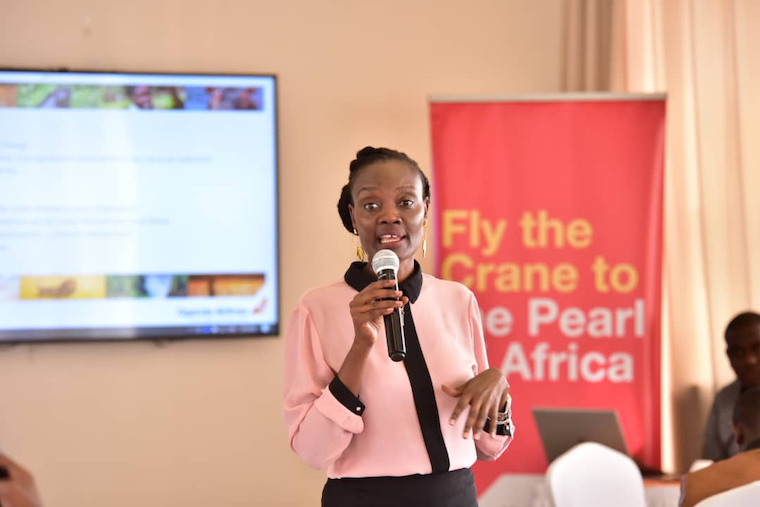 Uganda Airlines has revealed that it will focus on an investment in customer retention systems, seeking strategic partnerships, growing cargo operations, network expansion and championing the Covid-19 fight to improve on its performance in 2022.

This was revealed by the Acting Chief Executive Officer of Uganda Airlines, Jenifer Bamuturaki, as she released the company’s half-year performance.

She explained that the Uganda Airlines has expanded its network to 11 destinations since its inception and its revenue performance of FY2021/22 at half year stands at 64%.

She added the skewed performance was due to Covid-19 effects where the Airline had to reduce the flight frequencies on some routes.

In February 2021, Bamuturaki noted they received the second Airbus A330-800neo for long-haul flights and they are in the process of completing two interline agreements with Emirates and Qatar Airlines for passenger and cargo.

In the same year, Uganda Airlines started its first long-haul flight to Dubai in October after launching in Johannesburg in May 2021.

It also successfully had the Airbus included on its Air Operator Certificate (AOC) in August 2021 and this saw the commencement of its international flights to Dubai in October 2021.

The Airline started Cargo operations in September 2021 and in partnership with Airbus, Uganda Airlines signed a Flight Hour Services (FHS) agreement for after-sales support that will run for the five years.

Bamuturaki said the Airline managed to secure its technical performance and safety through integrated services like on-site engineering and repairs and timely spare parts availability through this contract.

She said there has been growth and remarkable performance on Bujumbura, Juba and Mogadishu routes, with a load factor of 70%.

In March 2021, Uganda Airlines received the World’s Youngest Aircraft Fleet Award by Ch-Aviation and the publication cited the average age of the aircraft in the Uganda Airlines fleet at 1.15 years as of March 2021.

The Airline also received an Appreciation Award from the Swissport Tanzania Plc in October 2021.

“2021 was an eye-opener on how we can sustainably use the fleet during the pandemic. With global economies opening up, the Airline is well positioned to resume full-scale operations and expand its network strategically,” said Bamuturaki.

She said the Airline is in the process of securing the Approved Maintenance Organizations (AMO) certification by the Uganda Civil Aviation Authority (UCAA).

The internal capability and capacity have been built by recruiting qualified engineers acquiring the required tools/equipment, spares and materials to the required standards, according to the authority.

“This milestone will reduce our dependence on foreign maintenance contractors and result in substantial financial savings, technology and skills transfer to our staff and the local maintenance and engineering workforce,” she said.

Business Times Uganda understands that the Airline is set to roll out its self-handling project by Quarter 1 of 2022 which will involve passenger, baggage and cargo handling, maintenance, security and general ground operations.

According to Bamuturaki, their network expansion plans for 2022 include direct flights to cities in Europe, India and the far East.

“We are also looking at points in DRC, West Africa and the Middle East. Feasibility studies to these cities are underway,” she said.

The Airline has also commenced its IOSA certification process with an anticipated completion date of October 2022 and with this certification, the Airline will be recognized, operating at an internationally accepted operational safety standard.

Michael Kaliisa, the Manager Corporate Quality at Uganda Airlines stated that the airline is seeking approval for the permit to fly and also sourcing for service providers for catering, fuel, and airport staff among others at London Heathrow Airport.