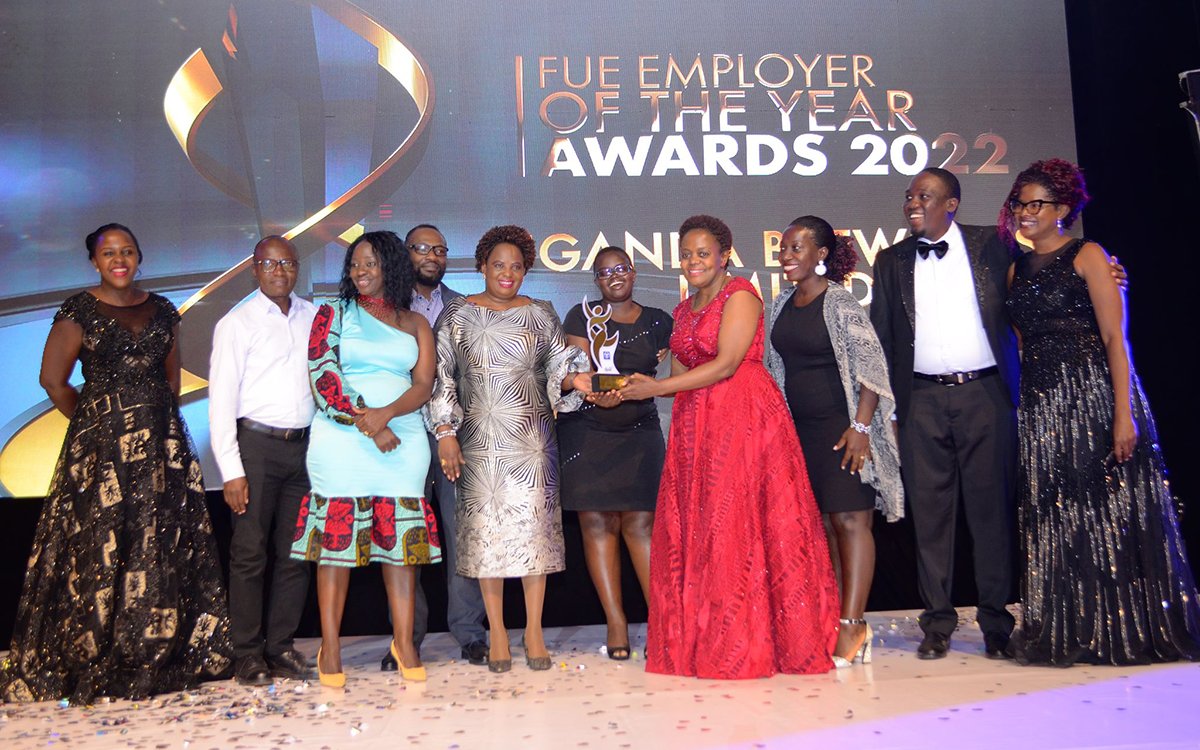 Uganda Breweries Limited (UBL) has won the coveted employer of the year award for 2022. UBL was crowned the Employer of the Year 2022 by the employers’ umbrella body known as the Federation of Uganda Employers (FUE).

The awards ceremony was held at the prestigious five-star Kampala Serena Hotel on Thursday night.

Last night’s victory was iconic for UBL since it is the second time within a period of 12 months that Uganda Breweries has been recognized as Uganda’s best work space. This follows the accolade that they received at the Prudential Best HR Awards ceremony that was organized in the earlier months of 2022.

“As a business that has championed inclusion and diversity, individual employee development and team building over the years, the award is a mark that such policies at the work place not only help us uncover the potential of all but also value human resource in every form, and positions workers to better exploit their capabilities – the award is a revelation that we are making strides in the right direction.”

“We have also shattered stereotypes at the workplace by employing women in production processes that were previously men’s stronghold. Currently, one of our production lines is managed by a 75% female staff, with a production capacity of over 25,000 bottles a day,” she said while receiving the award.

In 2021, the brewery committed to creating the most inclusive workplace recruiting ten talented young people with disabilities for six months of work experience placement roles.

The Federation of Uganda Employers (FUE) has in recent years recognized Uganda Breweries Limited as the best employer of the year in 2016/2017 in Employer of the Year Awards (EYA).

FUE is a national organization that was instituted to represent the interests of Ugandan employers in matters dealing with employment and people management. The Organization in 2001 launched the EYA awards to identify and recognize employers in Uganda that have excelled in establishing best human resource management policies and practices.

UBL has in addition to all these best practices and achievements rolled out the first-ever all-female commercial graduate program that led to the recruitment of 7 young ladies in the first cohort as an opportunity to inspire more girls to take up positions of leadership at the brewery. The purpose of the program is to develop a sustainable pool of young female professionals to take on the challenge of managing the brewery in future to fill middle management and senior positions.

The brewery has registered several other significant progresses that they have made towards attracting, growing and retaining talent some of which include;

– A thriving talent exchange program that has seen the brewery export 19 Ugandan employees across the Globe within the Diageo network.

Other winners of the night, included the following who won in various segments.

After UBL scooping the gold category as the overall winner at the awards gala, that attracted 127 corporate companies that took part in exhibiting best Human resource practices.

The winner in the silver category was Q CI-CIPLA this award was handed over by Dr Silver Byamugisha who is the Chairman of the Federation of Uganda Employers; Dr Silver Byamugisha is also the Managing Director of National Water & Sewerage Corporation which is one of Uganda’s biggest employers with several staff spread out across the country.

The other award included; the Young Employer Award which was presented by Multichoice Uganda’s MD Kiconco. Her media company owns powerful household brands like DSTV and GoTV this award was presented to Michael Enterprises.

The best SME employer awards was won by Partners for Children, and the Government ministry with the best employer practices was scooped by Ministry of Public Service.

The chief guest at the awards ceremony was Hon Betty Amongi who is a Member of Parliament but also the Minister for Gender, Labour and Social Development.

During her speech she noted that the economy is anchored on work.

“It is work that puts food on our tables,” she said adding that; “On behalf of my ministry I want us to give a handclap to the organizers.”

The Minister was given a token of appreciation that was handed over to her by Dr Silver Mugisha the FUE Chairman.

The Labour Minister noted that several sectors were impacted negatively by Covid-19 mentioning a few of them as; tourism, aviation, hospitality and all other sectors.

The research work that led to the announcement of the eventual winners was conducted by Makerere University that was represented by Professor Kikoma Julius from the prestigious institution of academic excellence.

The event was sponsored by Coca-Cola, Kansai Plascon, Nation Media Group’s Daily Monitor, KFM and NYV Uganda as well as the Federation of Uganda Employers (FUE) among others.

“These surveys are determined by the employers so that the researchers can put an intellectual lens to it,” said Prof Kikoma.

He said that the research team went to 127 companies which he said is double of what they usually have in their surveys.

The survey was conducted and 3,119 respondents took part in it with 58% of them being male and 42% were female.

He noted that we need to adopt technology to mitigate future disruptions. Prof Kikoma also noted that the companies that did well during Covid took time to plan and weighed the risks of covid. He said that as we have seen normal routines will not come back.