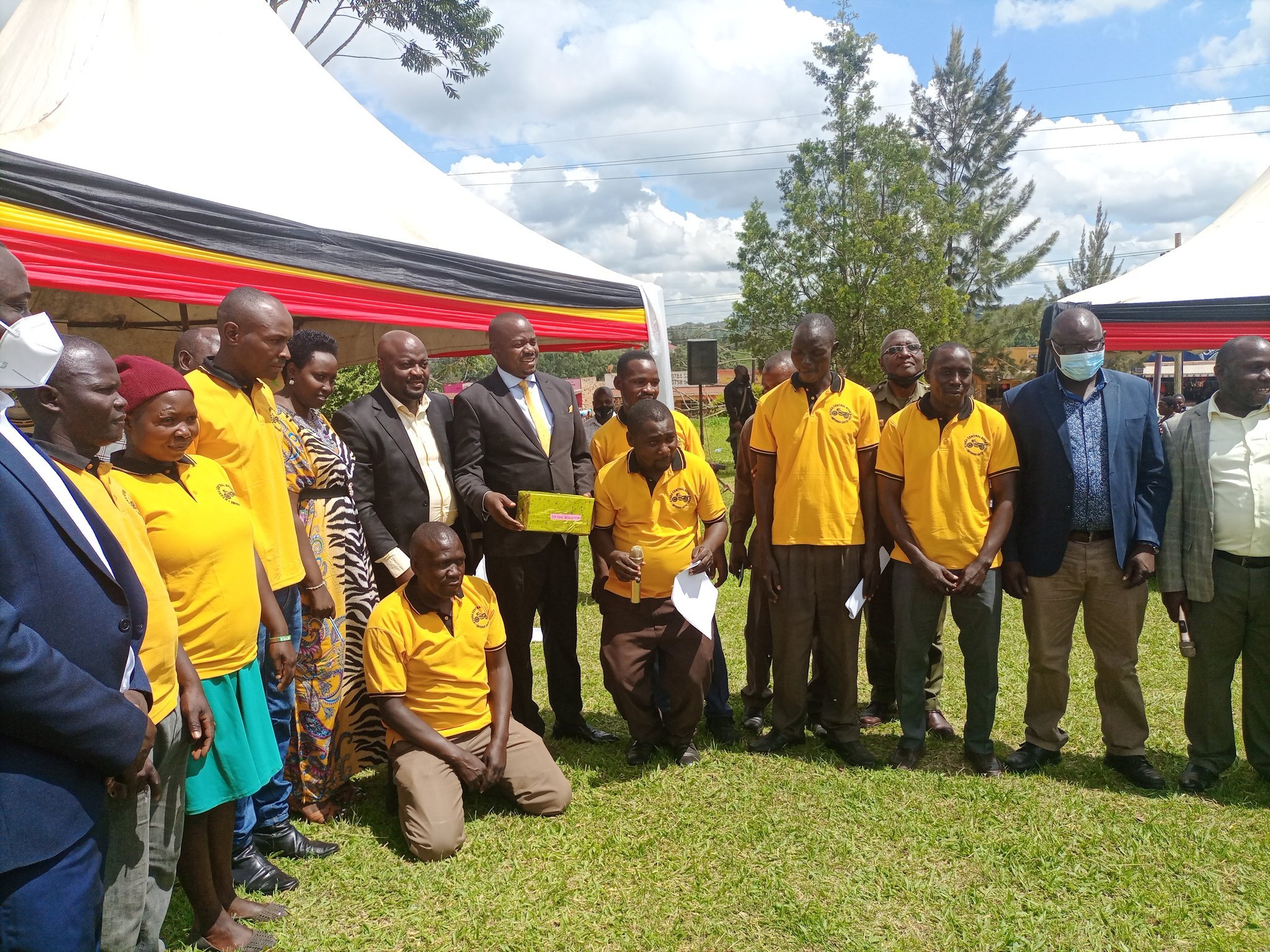 How SMEs will benefit from Emyooga funds

Launched in August 2019, the EMYOOGA programme aimed at availing seed capital to the financially excluded Ugandans engaged in specific and similar specialised enterprises/categories. Emyooga is a word derived from a local Ugandan dialect (Runyankole) to refer to specialised skills enterprises/groups.

It is a Presidential Initiative on Wealth and Job Creation.

The overall goal is to contribute to the socio-economic transformation of Ugandan households in the subsistence sector into a money economy and market-oriented production.

According to the Uganda National Household Survey (2019/20), 3.5 million (equivalent to 39%) households are still living in a subsistence economy, leaving them vulnerable to cross-generational poverty.

These enterprises/categories were pre-determined by Cabinet before the launch and subsequent rollout of the program.

The initiative was designed to provide direct support to communities through establishing specialised funds/Emyooga-specific Apex SACCOs at the constituency level country-wide, but with operations at the Parish level.

Emyooga is implemented through collaboration between the District Local Government taskforces headed by the Resident District/City Commissioners (RDC/RCC). Members include representatives from the Ministry of Finance, Planning & Economic Development (MoFPED), The Ministry of Trade Industry & Cooperatives (MTIC), Uganda Microfinance Regulatory Authority (UMRA) and Youth Action for Social Political and Economic Development (YASPED), among others.

The Microfinance Support Centre (MSC) is the lead implementing agency and fund manager. The five primary phases of the programme include community mobilisation and sensitisation, Association and SACCO registration, training, funds disbursement and programme monitoring.

According to a report by MSC, through the first phase, 205,710 parish-based associations (SACCOs) were mobilised and sensitised to join the programme while 6,478 Emyooga SACCOs were formed countrywide from 353 constituencies, municipalities and city divisions covering 10,200 parishes.

As of July 2022, Shs248.7billion has been released and benefitted 6,644 Emyooga SACCOs. In return, these Emyooga SACCOs have so far given loans valued at Shs 213.39bn to 59,410 associations. In addition, the SACCOs have mobilised Shs 72bn in savings, thereby making more funds available to the SACCOs to lend to members.

To strengthen the financial capacity of Emyooga SACCOs for sustainability, those with bigger membership and improved performance in governance, seed capital utilisation, loan recoveries and savings are supported with an additional seed capital of Shs 20m. The SACCOs that do not meet the set criteria are trained and guided through the process to improve performance and subsequently receive additional funding.

The MSC further reports that beneficiaries have expanded their small businesses such as extracting honey, wine, processing, soap-making and crafts, among others.

Access to affordable credit through Emyooga funds changed Ms Teddy Nakazzi’s fortunes. According to Nakazzi, she could not support her family through her restaurant business before she joined the Mityana Municipality Restaurant Operators SACCO SACCO.

“I used to work in my restaurant from 7:00 am to 10:00 pm every day but no matter how many hours I worked I could not earn enough to provide for my four children and my deceased brother’s five children. I Joined the Emyooga SACCO after noticing the positive experiences of other members,’ she explains.

She reveals that she with daily savings which later made her qualify to get a loan from the SAACO.

“I started to save regularly and soon I was able to take out a loan of 500,000 shillings, which I used to buy more tables and chairs for the restaurant to expand my business and attract more customers. After a while I got so busy that I had to employ three people to help me,” she notes

She says being a beneficiary of the Emyooga funds has changed her life as her business is very profitable and she has the necessary access to investment capital as a result, she can feed her family well beyond their basic needs and pay for the children’s education.

“I plan to acquire a plot of land and use my savings to build a new brick house to live in. I also plan is to diversify my business. I want to set up a shop that will sell the same food items as the restaurant, which will help secure my income and boost my business. Through my SACCO, I have learned to focus on my business. I have had to improve my work ethic to be able to contribute to the SACCO and save up money every day,” says Nakazzi.

Kisenyi II Ward bodaboda SACCO Located in Kisenyi Kampala district mothers 6 active associations. The Sacco received 30 million shillings from the government as an Emyooga grant, coupled with the training of members on financial and management skills from MSC to ensure that they manage the resources well and also sustain the SACCO by adopting a consistent savings culture, this has enabled them to save up to Ush30,870,000 disburse Ush45,160,000 and recover Ush28,154,000.

Mr Sselunkuma John, a member of Kiganda Stage Association which subscribes to Kisenyi II ward Boda Boda SACCO explains that his group received a loan of Ush3,000,000 after saving Ush700,000 and the group is doing pig farming.

Before the Emyooga programme, they had only 26 pigs but now they are at 40 pigs and constructed their housing and feeds. The profits depend on the piglets produced which start selling in 1 month, 3 months and 6 months. 1 month to 3 months pig costs Ush150,000 and six monthly old pig costs between Ush350,000 to Ush400,000.

Pigs produce between 7-9 piglets. So far, four pigs have produced (9, 13, 15 and 4) piglets. This has improved the business profits from 26 million to Ush80million. The group members have bought an acre of land to enlarge their piggery project.

“I can pay my medical bills, buy household items, and pay fees for my children from day schooling to boarding section. The association has the lowest interest rate which is a good encouragement to borrowing,” Sselunkuma says.

According to Namutebi, she was making and supplying chalks to schools around luweero Town council and outside the town council like Nakaseke and Nakasongola schools before joining the emyooga program.

However, she had the challenge of limited capital to meet demand in the market. She saved Ush500,000 hence acquiring a loan of Ush2,000,000 through the association.

“After receiving the seed capital, I stocked 10 bags of materials and each bag weighs 40Kgs at a cost of Ush70, 000. Each bag produces 3.5 cartons of chalk and each carton contains 20 small boxes of chalk with 150 sticks of chalk each. I sell each carton at Ush60,000 for those buying wholesale while a box containing 150 sticks of chalks is sold at UGX 3,000. Currently, I have eight cartons of chalk in my stock which helps me to make good quality chalk,” says Namutebi.

“I bought a male Rabbit at Ush60,000 and four female rabbits at Ush200,000. Five Rabbits have been produced and the project has 78 rabbits. On the market, a kilogram of rabbit meat costs Ush30,000 and can produce more than 50 Kgs.” she reveals.

Namutebi also sells organic Manure from her rabbit project with a jerry can of 20-litre rabbit urine being sold at Ush50,000. The facility has enabled her to exploit opportunities in her sector and she can generate income to sustain her household