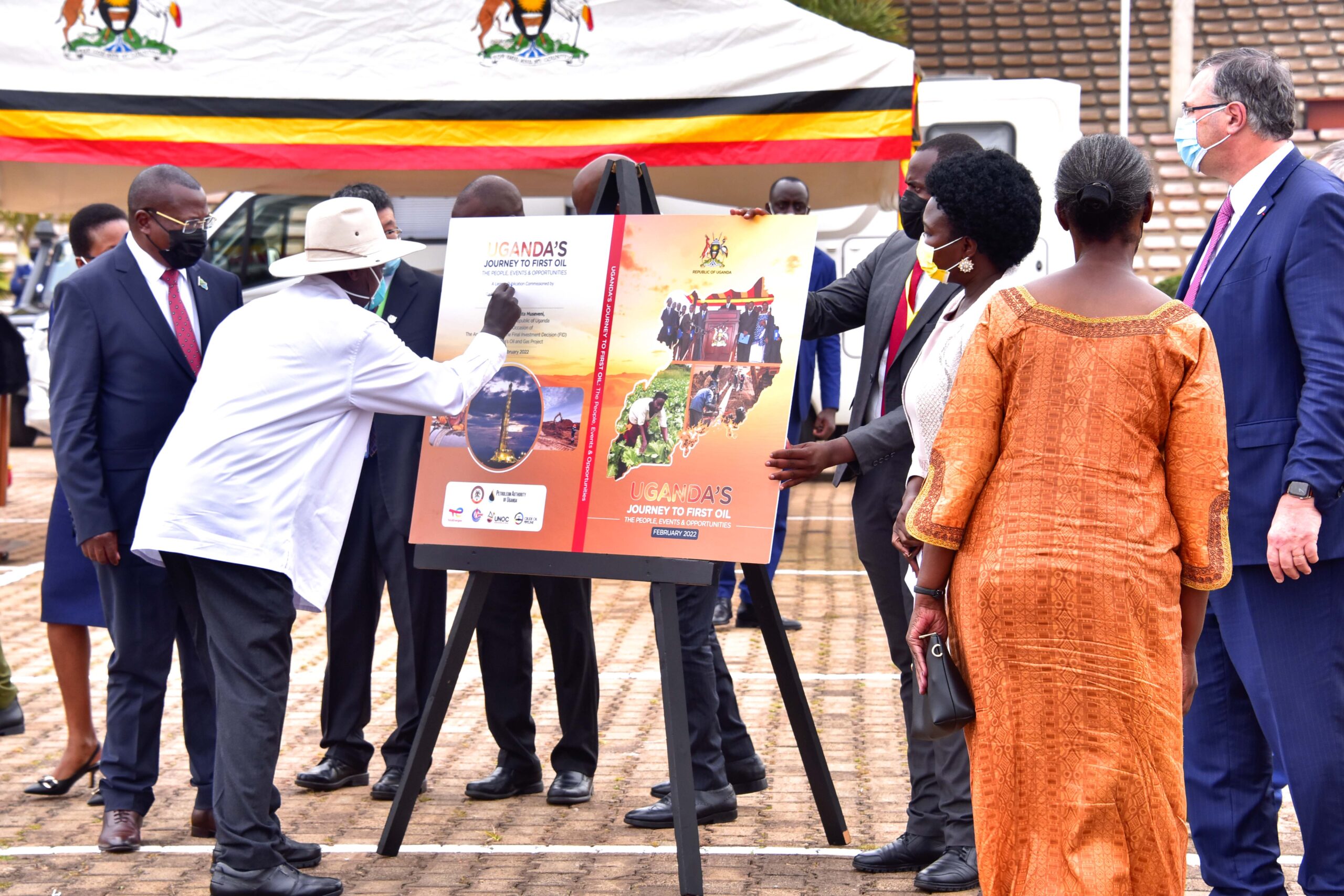 International oil companies French Total Energies and China’s CNOOC are the key investors, with the governments of Uganda and Tanzania as the clients and stakeholders.

Speaking at the signing ceremony officiated at by President Museveni and attended by Tanzania Vice President Dr Philip Mpango, who represented President Samia Hassan Suluhu, Eng. Irene Batebe, the Permanent Secretary at the Ministry of Energy, said the FID paves way for Uganda’s oil project to head to the next development and construction phases, and subsequently starting of commercial oil production.

“Now that we have achieved Uganda Oil FID, we’ll intensify issues of co-ordination, delivery in a timely manner of equipment to site, local participation and approvals.  We pledge to continuously support the oil companies in execution of their work as Uganda’s journey has been steady and measured. This process has followed deliberate action by the government. Funds have been mobilized and the project is viable,” she added.

“This is a day we are committing to invest $10 billion in the Uganda oil project, mainly the East African Crude Oil Pipeline Tilenga and Kingfisher Projects before the first oil in 2025,” he added.

Energy Minister Ruth Nankabirwa said the oil and gas is expected to catapult the country to middle income status.

“The oil industry will positively impact on the economy through various programmes. East Africans and Ugandans are expecting to get jobs and the pipeline has its bigger part, which calls for job creation,” she said.

“Close to 160,000 jobs are expected to be created, as well as provision of goods and services to the industry. In addition, Uganda and Tanzania’s tax bases will significantly expand,” she added.

The Board Chairman of Uganda National Oil Company (UNOC), Mr. Emmanuel Katongole, hailed President Yoweri Museveni for patiently and wisely guiding the sector when difficult decisions had to be made.

He asked joint venture partners to expedite work because the people cannot wait to taste the fruits of oil.

“We must work together to ensure that a reasonable portion of the US$15billion is taken by Ugandans. Let’s commit to achieving the first oil as soon as possible. Make 2025 a reality,” he said.

In his remarks, President Museveni explained that Uganda’s oil journey started as early as the 1920s by the British. But they didn’t make any headway.

“The British started the exploration of petroleum in Uganda in 1920.  Our ancestors called that place Kibiro. Our locals showed the British that there was something boiling from underground,” he said.

“The British looked for this oil and couldn’t get it. When I came into government, I read the file. The British Commissioner of Geological said it seems the oil was there but evaporated.

“In 1986, investors approached me about the oil in Lake Albert. I turned them away because I did not have anyone on my side (Ugandan) who understood oil. We then sent people to go and study about oil so that we can engage investors better,” he added.

During the function, the President also allayed fears that Uganda’s oil, which is expected to be produced in 2025, will lose market because of the growing preference of green energy across the world.

“There is a move to green energy in the world. There is worry if our oil will fail to have market. We have studied this, and we know our oil won’t kudiba (kudoda in Kiswahili),” President Museveni said.

Total Energies EP Uganda and CNOOC are licensed to operate in Uganda after each acquiring a 66.66% stake from Anglo-Irish Tullow Oil PLC.

The FID means means TotalEnergies will start construction on its Tilenga oil project in Nwoya and Buliisa districts.

The two oil companies, along with the Uganda National Oil Company (UNOC) and Tanzania through its national oil company, TPDC, are shareholders in the proposed EACOP which will transport crude oil from the central point in Hoima to Tanga Port en route to the international market.

The shareholding in the EACOP holding company is; UNOC with 15%, TotalEnergies East Africa Midstream B.V with 62%, CNOOC with 8%, and TPDC with 15%.

The capital expenditure for the 1,443km duct is estimated at $3.55b (Shs 13trillion), 70% of which will be raised from international lenders.   The Ugandan section of the pipeline is about 296km through 10 districts and 25 sub-counties, and 172 villages, and affecting at least 4,121 persons.